If you like your stories full of magic, mythology, and intrigue — all beautifully drawn and set in an exotic and vibrant locale — then consider joining me in supporting this fascinating new Kickstarter project: Zindan Comic Series. It combines my love of comic books with my even greater passion for history, world culture, and fresh new settings.

But you do not have to share such preferences to appreciate the uniqueness and artistry of this project.

Written and created by Omar Mirza and Khurram Mehtabdin, Zindan draws on the extravagance, mythology and beauty of the Mughal Empire. By combining a historically accurate time period with a fictionalized story involving magic and mysticism, the creators hope to propel the audience into an entirely new dimension of comic excellence. The story takes place in the 17th century, through the eyes of orphan brothers Zain and Timur, who belong to a secret order known as The Ansaars. The Ansaars are the protectors of world’s worst prison known as Zindan. With the Mughal Empire crumbling in the background as an emperor is betrayed by his own son, Zindan falls and Issue #0 begins.

Apparently, Issue #0 debuted this past October at New York Comic Con to considerable praise. Although I have yet to read it, the sample work and narrative details seem pretty interesting, with a lot of neat concepts drawing from the rich but largely untapped (in the West at least) history and mythos of India.

Zain and Timur are the protagonist orphan brothers of this story. Like many orphans of this time, they grew up as captives within various bandit tribes. By sheer chance, they are rescued and taken in by the Ansaars, an ancient secret order, who have sworn an oath of stewardship over Zindan. Zindan is the continent’s most majestic and secretive prison, which holds some of the worst criminals, as well as the land’s most sought after riches. Zain and Timur spend much of their lives knowing Zindan as their home.

The Ansaars and Zindan were originally created in response to a powerful threat to humanity posed by Wayl. Also known as The Immortal, Wayl serves as a central villain in the series. In his quest to release his evil ancestors from their mountain tombs, he finds a way to utilize the power of Jinns. By tapping into the great magical power of Jinns, Wayl has caused a significant imbalance in the fabric of mankind. Compelled by the threat of Wayl’s evil obsession, three empires rise up to defeat and imprison him within Zindan.

The series begins as Zindan falls to a greedy king after a battle between his army and The Ansaars. This event releases The Immortal, along with countless other villains who have accumulated in Zindan’s cells over the years. With everything lost once again, Zain and Timur are thrust back into a big world. This time, however, they are driven by vengeance and a special purpose to recapture the evils that the fall of Zindan has unleashed. The series captures their journey across empires and exotic locations throughout the Middle East, Persia and India as they attempt to recapture and defeat the world’s worst villains that had escaped Zindan. Through their odyssey, Zain and Timur will make allies, even more enemies, all whilst learning about their own past, while they carry on as The Last Ansaars of Zindan.

The team’s makeup is as appropriately multicultural as its series, with seven members across three continents.

Creative start-ups of any kind are tough, especially in a market as competitive and difficult to break into as comics. I imagine it will be all the more challenging for a series like Zindan, given its rather unique premises and settings (to my knowledge, few prominent comic series published in America take place in such foreign settings).

This may explain why such an otherwise interesting project has gained so little funding so far: as of this post, it has only a little over a week to raise around $6,400. Thankfully, I have seen a lot of Kickstarter projects remain docile until the last few days before getting a rush of donations to get fully funded. But I am not going to leave it to chance, hence why I ask you to give what you can or at least spread the word (if you are interested of course).

Best of like to the creative minds behind Zindan. I hope you find success. 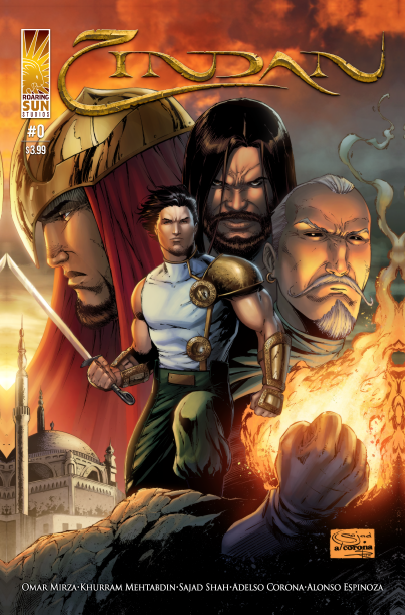 If you appreciate unusual and obscure science fiction (in the West anyway), or just want to explore something different and interesting, consider backing this Kickstarter campaign, which seeks to compile previously untranslated Soviet and Russian works.

This Kickstarter project will sponsor the publication in 2015 of the first comprehensive edition of truly notable Russian and Soviet science fiction – works chosen for their artistic and scientific merit, not because of any political or ideological agenda.

The 400+-page volume will include 18 stories, spanning from path-breaking, pre-revolutionary works of the 1890s, through the difficult Stalinist era, to post-Soviet stories published in the 1980s and 90s.

None of the works in this volume has ever been translated into English before, and we are engaging the services of some of the finest translators available to help us produce the sort of quality publication our 25-year-old company is known for.

You can see the official promotional video below, which offers a glimpse of some of the intriguing themes and plots of some of these works.

The creator of the project, Russian Life, is one of the largest publishers of Russian literature in the U.S., and virtually the only English-language periodical on Russian lifestyle, history, and culture. (I am a subscriber and regular visitor.) So I am confident they will deliver on this enticing treat.

$16,000 does not seem like a lot to ask for providing a hefty sampling of one of the world’s most prolific, yet obscure, producers of fiction and thought. You do not have to be a Russophile to appreciate quality science fiction, whatever its source.