On this day in 1898, white supremacists seized power in Wilmington, North Carolina, in the only instance of a government being overthrown within U.S. history.

Originally described as a race riot initiated by blacks, over time, more facts emerged revealing that whites had planned an insurrection against the biracial “Fusion Party” that had been legitimately elected. A mob of over 2,000 whites, armed with over 400 small arms and a Gatling gun, expelled opposition black and white political leaders from the city, destroyed the homes and businesses black citizens built up since the Civil War—including the only black newspaper in the city—and killed an estimated 60 to more than 300 people.

Another 2,000 blacks fled, most never to return; the once black-majority city was now a white-majority one. In a cruel irony, the driving force of the coup was white resentment of “black success”, which was actually minimal: though blacks made up nearly 60 percent of the county’s population, only eight percent owned property; of nearly $6 million in real and personal property taxes, blacks paid less than $400,000 of this amount. Per capita wealth for blacks was $30, compared to $550 for blacks. Yet affluent whites believed that they were paying a disproportionate amount of taxes compared to blacks, who now held political power and were believed to be targeting white wealth. 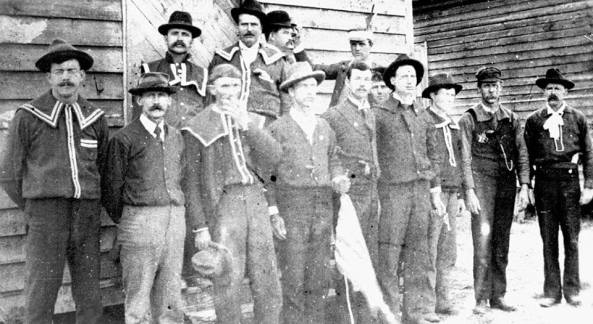 Mob posing by the ruins of The Daily Record, the only black newspaper in town. Wikimedia Commons.

There was also tension with poor, unskilled whites, who competed with blacks in the job market, and found their services in less demand than that of skilled black labor. In essence, Wilmington blacks were “caught between not meeting the expectations of affluent whites, and exceeding the expectations of poor whites, effectively moving too fast and too slow at the same time.”

(In a cruel irony, when those working class whites finally took the jobs that had once been filled by blacks, they were disappointed with the types of work, describing it as black jobs with bad black wages.)

Though some petitioned the federal government to intervene, the McKinley administration claimed it could not do so without permission from the governor, who had made no request for assistance. The leader of the mob, Colonel Alfred Moore Waddell—who had threatened to “choke the current of the Cape Fear River” with black bodies—was elected mayor of Wilmington, and held power until 1905. The vast majority of coup organizers and plotters went on to be politically successful: one leader served five terms in Congress, followed by a stint as governor; a woman who supported lynching was appointed as the first female senator (albeit for one day), and went on to be a prominent suffragist; several others became long-time senators and federal officials.

The Wilmington coup was part of a broader effort to take back control of post-Civil War North Carolina and reinstate white supremacy. Through rallies, parades, and organized militias of “Red Shirts”, blacks were intimidated from voting and the white-dominated Southern Democrats took statewide power. Just a year later, a flurry of Jim Crow laws was passed to restrict the voting, residency, and property rights of blacks, which would remain in place well into the 20th century.

The following is a long and disturbing account by a reverend of what transpired:

It was a great sight to see them marching from death, and the colored women, colored men, colored children, colored enterprises and colored people all exposed to death. Firing began, and it seemed like a mighty battle in war time. The shrieks and screams of children, of mothers, of wives were heard, such as caused the blood of the most inhuman person to creep. Thousands of women, children and men rushed to the swamps and there lay upon the earth in the cold to freeze and starve. The woods were filled with colored people. The streets were dotted with their dead bodies. A white gentleman said that he saw ten bodies lying in the undertakers office at one time. Some of their bodies were left lying in the streets until up in the next day following the riot. Some were found by the stench and miasma that came forth from their decaying bodies under their houses. Every colored man who passed through the streets had either to be guarded by one of the crowd or have a paper (pass) giving him the right to pass. All colored men at the cotton press and oil mills were ordered not to leave their labor but stop there, while their wives and children were shrieking and crying in the midst of the flying balls and in sight of the cannons and Gatling gun. All the white people had gone out of that part of the City, this army of men marched through the streets, sword buckled to their sides, giving the command to fire. Men stood at their labor wringing their hands and weeping, but they dare not move to the protection of their homes. And then when they passed through the streets had to hold up their hands and be searched. The little white boys of the city searched them and took from them every means of defence, and if they resisted, they were shot down … The city was under military rule; no Negro was allowed to come into the city without being examined or without passing through with his boss, for whom he labored. Colored women were examined and their hats taken off and search was made even under their clothing. They went from house to house looking for Negroes that they considered offensive; took arms they had hidden and killed them for the least expression of manhood. They gathered around colored homes, firing like great sportsmen firing at rabbits in an open field and when one would jump his man, from sixty to one hundred shots would be turned loose upon him. His escape was impossible. One fellow was walking along a railroad and they shot him down without any provocation. It is said by an eye witness that men lay upon the street dead and dying, while members of their race walked by helpless and unable to do them any good or their families. Negro stores were closed and the owners thereof driven out of the city and even shipped away at the point of the gun. Some of the churches were searched for ammunition, and cannons turned toward the door in the attitude of blowing up the church if the pastor or officers did not open them that they might go through.