Today I learned that the lead artist for Disney’s “Bambi” was a Chinese-born illegal immigrant who drew inspiration from the art styles of the Song Dynasty.

Tyrus Wong was born Wong Gen Yeo on this day in 1910, in Taishan, Guangdong, China. When he was nine, he and his father immigrated to the United States, where they were initially detained, separated, and questioned due to the Chinese Exclusion Act, which prohibited immigrants from China. They assumed false identifies as “paper sons”—relatives of Chinese Americans already legally resident in the U.S.—and were subsequently released, ultimately settling in L.A.

From an early age, Wong’s artistic ability was noticed by his teachers, earning him a summer scholarship to the esteemed Otis Art Institute, which he joined at age 16. He credited his love of art to his father, who made him practice traditional Chinese calligraphy every night, using water and newspaper due to their poverty. While studying art, Wong walked miles to attend class and worked as a janitor at the Institute.

Upon graduating, he went to work in Hollywood, where he was tapped as an animator and illustrator by Disney, at a time when few Asian Americans are involved in the film or media industry. His artistic talent and unique skill in classical Chinese art accounted for the film’s famously gorgeous backgrounds and landscapes. As the New York Times noted:

The spare but expressive style of Mr. Wong’s work draws heavily from the landscape paintings of the Song dynasty (A.D. 960–1279). In an interview, Nancy Berliner, curator of Chinese art at the Museum of Fine Arts, Boston, called this period “the height of Chinese painting.”

Finely detailed elements, such as a gnarled tree or a sailboat crossing a lake, were surrounded by landscapes rendered in extremely subtle flecks and shades of ink. Although these works were made solely with black ink, artists at the time aimed to incorporate every shade of gray within their works, using deliberate brushwork and exquisite care.

This almost abstract style, Ms. Berliner said, was a philosophical reaction against the tradition of realism. (A sort of 10th-century avant-garde, you could say.) Artists in this mode argued that purely representational work was “seductive” — dangerously sensual.

By comparison, Song dynasty painting idealized the expression of the artist, and the painting as a direct connection with the heart and soul of its creator.

It is incredible to think that one of the most famous and seminal works in American animation owes a large amount of its success to traditional Chinese art by an immigrant who was not allowed in the U.S. Bambi played a pivotal role in influencing and shaping public opinion around the nascent animation medium, leading Disney to several other hits from “The Jungle Book” to “The Lion King”.

Wong’s production illustrations for Bambi (1942). Water to Paper, Paint to Sky: The Art of Tyrus Wong

Alas, Wong received little to no credit for his groundbreaking contribution, which many believe was due to racial prejudice. Moreover, he was fired by the staunchly ant-union Disney in the aftermath of an animators’ strike. Fortunately, he continued to find work elsewhere in Hollywood, illustrating scripts, drawing storyboard, and painting production images at Warner Bros.; interestingly, he earned the job with a portfolio of illustrations for Aladdin, which you can see here.

Wong also pursued other artistic projects, both personal and commercial; from hallmark cards to complex kites, art remained a lifelong pursuit even into old age. In 2001, when he was 91 years old, he was finally inducted as a Disney Legend, the hall of fame for the greatest contributors to the Walt Disney Company. He died in 2016 at the ripe old age of 106—more than long enough to see credit given for his work 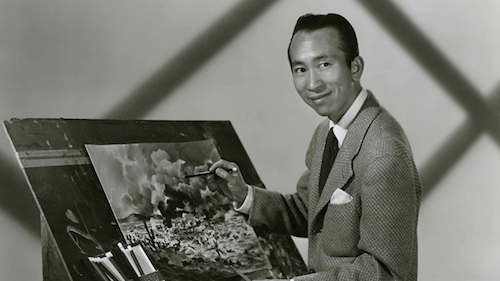