Most dramatically, it found that the country’s three richest individuals—Bill Gates, Warren Buffett and Jeff Bezos—collectively hold more wealth than the bottom 50% of the domestic population, “a total of 160 million people or 63 million American households.” Roughly a fifth of Americans “have zero or negative net worth,” the authors wrote.

Bezos, Gates and Buffett held a combined fortune of $248.5 billion in mid-September, when numbers were locked in for the 2017 Forbes 400list. Since then that figure has risen to an estimated $263 billion, thanks largely to Bezos, whose worth has jumped more than $13 billion as the result of a surge in Amazon’s share price.

“If left unchecked, wealth will continue to accumulate into fewer and fewer hands, a trend we’ve been witnessing for decades,” wrote Josh Hoxie, one of the study’s co-authors.

Indeed, this past October, about a year after this report was published, Bezos’ wealth nearly doubled to an unfathomable $160 billion. To put that in perspective, a billion seconds equals about 32 years.

Here is a breakdown of how wealth divides among the top 400 individuals: 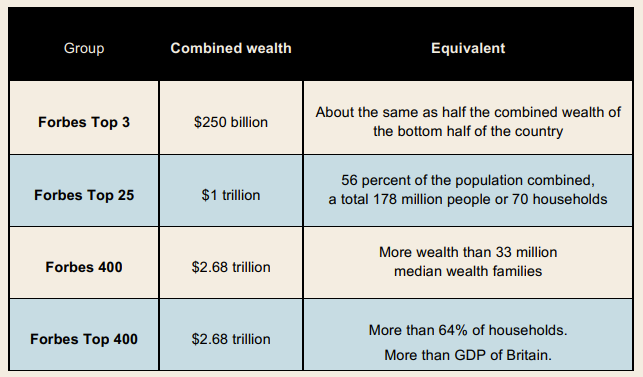 This trend goes beyond the household names in super-wealth: over the past three decades, the rate of wealth concentration has intensified to the point that the richest people today are many times wealthier than the richest people of yesterday.

Over the years, the cutoff for The Forbes 400 has risen dramatically. In 1982, the ranking’s inaugural year, the minimum net worth was $100 million. This year the barrier to entry hit an all-time high of $2 billion.

In its report, the think tank also found that, collectively, the individual on The Forbes 400 hold more wealth than the bottom 64% of the country, “more people than the populations of Mexico and Canada combined.” Altogether, the list members were worth $2.7 trillion this year, a 59% increase over the last five years alone.

The net worth of the median American family, meanwhile, has declined by about 3% on an inflation-adjusted basis since Forbes began publishing the 400 in the early 1980s, the institute says. It reports that the typical U.S. family is presently worth some $80,000.

Even a million dollars is more than most people know what to do with, yet altogether a mere four hundred people have close to three trillion dollars. How does one even quantify that level of wealth? Ours is an economy where people have to sell possessions and crowd-source their medical treatment, and where children worldwide die by the hundreds of thousands from easily treatable causes, yet it is far easier for incalculable wealth to accrue in a few hands than to address these problems.