Chiune “Sempo” Sugihara was a Japanese government official who, as vice consul of Japan in Lithuania, helped over 6,000 Jews flee certain death during WWII, risking his career and his life. Hundreds of Jewish refugees arrived in Sugihara’s consulate, trying to get a visa to travel to Japan. Unsurprisingly, the Japanese Empire had very strict immigration procedures, requiring applicants to pay large fees and to have a third destination lined up to exit Japan. The dutiful Sugihara contacted the Foreign Ministry three times for instructions, being told each time that he could not issue the visas. 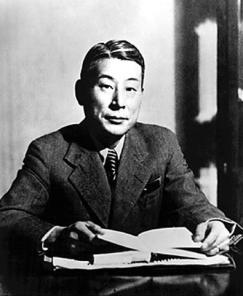 Aware of the mounting danger Jews faced, Sugihara ignored his superiors and issued ten-day visas to Jews. This level of disobedience was highly unusual – and risky – within the stringent culture of the militaristic Japanese government. With the Soviet Union occupying Lithuania – though not yet at war with Japan – he persuaded Soviet officials to allow Jews to travel through the country via the Trans-Siberian Railway, which would take them to the Pacific near Japan. He reportedly spent 18-20 hours a day handwriting visas, producing a typical month’s worth of transit documents daily. These were to heads of households, which allowed entire families to leave via a single visa. The exceedingly polite diplomat had the refugees call him “Sempo”, a variation of his name that was easier for them to pronounce.

After a couple of months, Sugihara had to leave his post, as the consulate was to be closed. He was witnessed frantically writing visas while going from his hotel to the train station. As he prepared to depart, he told those around him “Please forgive me, I cannot write anymore. I wish you the best” and bowed deeply. Having run out of paper, he desperately used blank sheets of paper with only a consulate seal and his signature Even as the train was leaving, he flung visas out the window.

There was never any official retaliation to Sugihara’s actions by the Japanese government. In 1984, he was recognized as a Righteous Among Nations for his rescue efforts. In 1985, a year before his death, he was asked why he disobeyed his orders and issued visas until the very end:

“Well. It is the kind of sentiments anyone would have when he actually sees refugees face to face, begging with tears in their eyes. He just cannot help but sympathize with them. Among the refugees were the elderly and women. They were so desperate that they went so far as to kiss my shoes, Yes, I actually witnessed such scenes with my own eyes. Also, I felt at that time, that the Japanese government did not have any uniform opinion in Tokyo. Some Japanese military leaders were just scared because of the pressure from the Nazis; while other officials in the Home Ministry were simply ambivalent.

People in Tokyo were not united. I felt it silly to deal with them. So, I made up my mind not to wait for their reply. I knew that somebody would surely complain about me in the future. But, I myself thought this would be the right thing to do. There is nothing wrong in saving many people’s lives….The spirit of humanity, philanthropy…neighborly friendship…with this spirit, I ventured to do what I did, confronting this most difficult situation—and because of this reason, I went ahead with redoubled courage.”

The number of people he ultimately saved his disputed, but one estimate suggests that 40,000 descendants of Jewish refugees are alive because of his actions.