According to a report from Bloomberg, Hong Kong surpassed New York City with the highest population of people worth at least $30 million:

The former British colony saw its number of ultra-wealthy increase 31 percent last year, to about 10,000, research firm Wealth-X found, higher than the nearly 9,000-strong population of the U.S.’s largest city. Tokyo came third, while Paris beat out London to take the European crown as Brexit weighed down the U.K. capital.

The number of ultra-rich worldwide rose 13 percent last year, according to Wealth-X, totaling about 256,000 people with combined assets of $31.5 trillion. Asia saw the fastest growth, driven by mainland China and Hong Kong, the study’s authors wrote. Reflecting the region’s rise, its share of the global population of people with at least $30 million rose to just over one-fourth, up from around 18 percent a decade ago.

Women accounted for about 35,000 of the ultra-rich last year, a record-high share of nearly 14 percent, the study found.

While Hong Kong topped the city rankings, nowhere in mainland China made the top 10, despite the country being third in the list of nations. That’s because China’s wealthy are widely dispersed, illustrated by the fact it was home to 26 of the 30 fastest-growing cities for the ultra-rich. 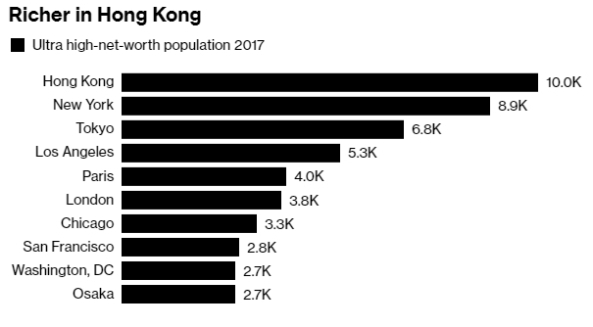 Although the world’s wealthiest tend to concentrate in major cities — since they are centers of global trade, politics, and commerce, as well as leisure and recreation — they are dispersed enough to change the results when one looks at a national level: for example, countries like Canada and Germany are home to some of the world’s largest communities of millionaires, even though none of their cities are in the top ten: 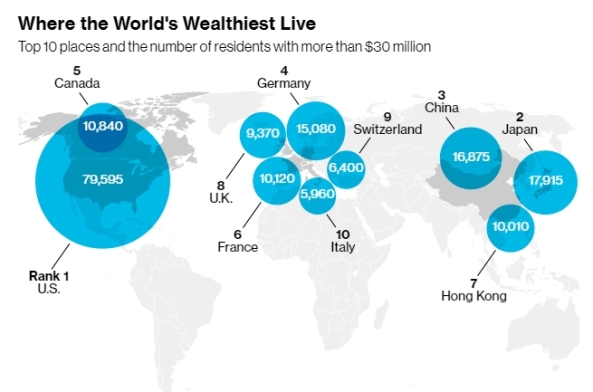 Similarly, no city in mainland China made the top ten, despite the country being third in the list of nations. That is because China’s wealthy are widely dispersed throughout the numerous economic and metropolitan hubs across the country — in fact, all but four of the 30 fastest-growing cities for the ultra-rich are Chinese.

Moreover, Bloomberg notes that the sheer scale of wealth is being pushed ever upward: though billionaires are of course still rare, they are less so than they used to be; the same goes for millionaires of all levels.

One should ask how it is that the global economy can produce such unfathomable concentrations of wealth into a sliver of individuals and communities, when literally half the world remains mired in poverty (and most of the remaining half teetering). Around the same time that Hong Kong climbed to the top spot as home to the ultra-wealthy denizens, its poverty rate has increased to one out of five residents.