On this day in 1982, a Christian Lebanese militia known as the Phalange carried out a massacre in the Palestinian refugee camp of Sabra and Shatila in Beirut, killing between 460 to 3,500 civilians. The killings went on for three days, under the watch of various forces, including the Israeli and Lebanese armies, which did nothing.

The Palestinians were wrongly blamed for assassinating newly elected Lebanese president Bachir Gemayel, the leader of the Kataeb Party, a Christian party close to the Phalange. (Just about every political party had an affiliated armed wing.) For their part, the Israelis, who were allied with the Phalange other Lebanese militas, were keen clearing out the camp of fighters of the Palestinian Liberation Organization, even though the vast majority of those killed were noncombatants.

I saw dead women in their houses with their skirts up to their waists and their legs spread apart; dozens of young men shot after being lined up against an alley wall; children with their throats slit, a pregnant woman with her stomach chopped open, her eyes still wide open, her blackened face silently screaming in horror; countless babies and toddlers who had been stabbed or ripped apart and who had been thrown into garbage piles.

The barbarism of the slaughter reflects the all-too familiar cyclic nature of violence: the man who ordered the killings, Elie Hobeika, saw his family and fiancée murdered by Palestinian militiamen and their Lebanese allies at the Damour massacre of 1976 — which itself was a response to the 1976 Karantina massacre of Palestinians and Lebanese Muslims at the hands of Christian militants. (Hobeika later became a long-serving member of the Lebanese Parliament and served in several ministerial roles before his assassination in 2002, which is variously blamed on Israel, Syria, or Lebanese nationalists.) 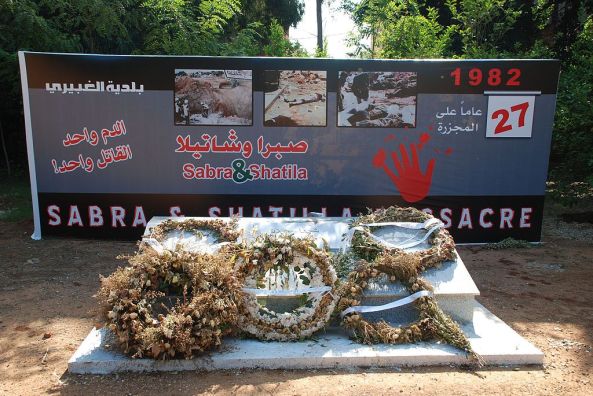 Though most agree Hobeika bears direct responsibility, a 1983 commission by the United Nations concluded that Israel, as the camp’s occupying power, bore some blame for the violence; the commission also recognized the massacre as a form of genocide. The same year, the Israeli Kahan Commission, appointed to investigate the incident, found that Israeli military personnel, aware that a massacre was in progress, had failed to act. The commission deemed Israel indirectly responsible, and Ariel Sharon, then Defense Minister, bore personal responsibility “for ignoring the danger of bloodshed and revenge”, subsequently resigning.

The U.S. was also responsible for removing an American-led multinational force that had been created to guarantee the safety of the Palestinians, amid much protest. U.S. Secretary of State George Schultz accepted responsibility for this decision, and although the Multinational Force returned days later, it left in July 1983 following a bombing that killed hundreds of American and French soldiers.

Nevertheless, many Lebanese supported this action, and continue to resent the presence of Palestinians in the country. As a second generation Lebanese American, I am fortunate to be far removed from such horror; the fact that this level of hatred is alien to me speaks to my privilege and good fortune. I am also encouraged by how Lebanese of my generation seem increasingly determined to move past this endless cycle of animosity–it is the only thing keeping me optimistic in the face of events like this.