The title may seem incongruous, but despite Texas’ reputation for toughness and natavism, one of its largest cities, at least, is a national leader in giving refugees from around the world a second chance in life. As the Houston Chronicle reported:

Though all 50 states have accepted some refugees, Texas typically takes about 10.5 percent of the national total, according to U.S. State Department numbers. More of them come to the Houston area than to anywhere else in Texas. In fiscal year 2014, the state health services department reported, nearly 30 percent of Texas’ refugees landed in Harris County.

Taken together, this data means that Harris County alone welcomes about 25 of every 1,000 refugees that the U.N. resettles anywhere in the world — more than any other American city, and more than most other nations. If Greater Houston were a country, it would rank fourth in the world for refugee resettlement.

Perhaps just as surprising is that the U.S. as a whole took the vast majority of refugees (71%) referred by the U.N. for permanent resettlement between 2010 and 2014. In fact, this had been the case since 1980, when the country adopted the Refugee Act, which administrations of both parties have honored. In total, the U.S. has accounted for 3 million out of the 4 million refugees resettled worldwide.

Not surprising, however, is that the U.S. has since reversed this policy: as of 2017, only 33,000 refugees were resettled in America, the lowest in three decades; other countries also saw historic declines, although the U.S. experienced the steepest drop. Though it still takes in the most refugees numerically, in per capita terms Canada, Australia, and Norway resettle the most refugees for their size.

Meanwhile, the refugee crisis is at its worst on recorded, with close to 20 million people internationally displaced (and double that number displaced within their countries). 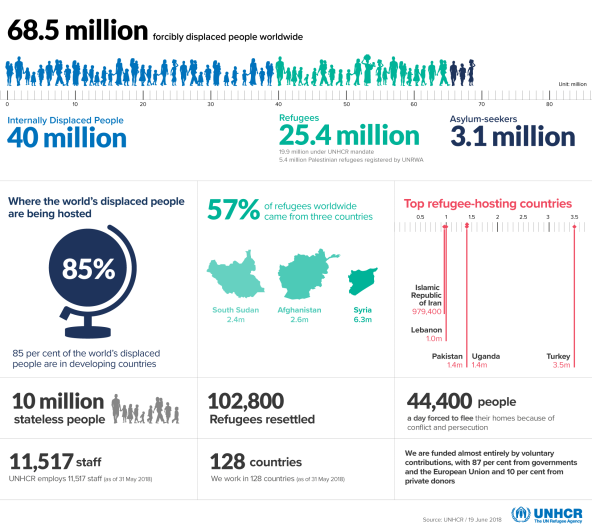