On this day in 1928, the first three of over sixty nations signed the Kellogg–Briand Pact, in which states promised not to use war to resolve “disputes or conflicts of whatever nature or of whatever origin they may be, which may arise among them.”

Named after the U.S. Secretary of State and the French Foreign Minister, who together authored the proposal, it was ratified with overwhelming legislative support by both nations plus Germany; a year later, 62 countries — most of the world’s independent states at the time — signed it. 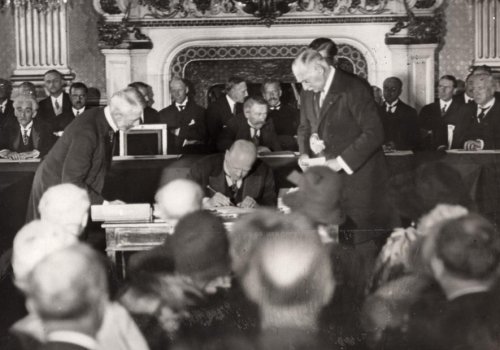 To call the Pact a failure would be an understatement: barely a decade later, the bloodiest and most barbaric conflict in history would erupt, instigated by one of the earliest signatories (and involving most of the rest). Even before then, several bloody conflicts broke out, such as the Japanese invasion of China (1931) and the Italian-Ethiopian War (1935).

Subsequently, the Pact is considered irrelevant at best, and dangerously idealistic and moralistic at worst, yet another example of the failures of globalism. Though it failed to live up to its ambitious aims, the Pact did have some successes.

For starters, it laid the legal foundation for the concept of a “crime against peace“, for which the Nuremberg and Tokyo Tribunals tried and executed the top leaders responsible for starting the Second World War. Its provisions were incorporated into the U.N. Charter and other treaties, and it set in motion the historically radical idea that war is a bad thing that nations should avoid. As it happens interstate warfare has been exceedingly rare since WWII, and is actually the lowest it has been for millennia.