Belarus, a former Soviet republic of about 10 million, is said to have the highest per capita number of World War II films in the world. Many of them are considered to be some of the finest war movies in history, most notably the 1985 film Come and See, which tells the story of a young teenager who joins the Belarusian resistance and witnesses horrific atrocities. 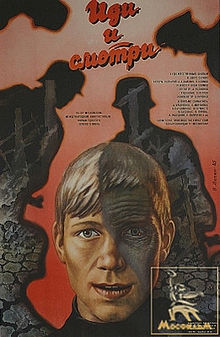 The Soviet theatrical poster for Come and See.

The country’s obsession with the war is understandable, as it bore the brunt of the massive Axis invasion of Soviet Russia, then years later bore the brunt of the equally large and bloody Soviet counteroffensive. As with Poland, Ukraine, and European Russia, the Nazis planned to depopulate the entire region to make way for Aryan settlement; to that end, during their three year occupation, the capital city of Minsk (which was nearly half Jewish) was almost totally leveled, up to 10,000 settlements were wiped off the map, and over 2.2 million people were killed — one third of the population.

For this reason, Belarus and its neighbors, namely Poland and Ukraine, are sometimes known as the “Bloodlands” of WWII: places where the level of death and destruction were unprecedented in scale and brutality.