Iran rarely features positively in any news reports. Yet the nation of over 80 million is young, cosmopolitan, and freer-thinking than its regime (or its enemies) make it out to be. Just one case in point — on top of centuries of rich cultural heritage — is the opening last year of what may be the largest educational complexes of its kind. As reported in Newsweek:

Officials unveiled the Book Garden, a giant academic complex on Wednesday. At roughly 65,000 square meters (about 700,000 square feet), the center has several movie theaters, science halls, classrooms, a restaurant, a prayer room and whole a lot of literature. On its roof is a green park area for reading.

All in all, the center aims to encourage Iranian children to be “active and creative through modern methods and equipment,” as the Mehr News Agency reported Parliament Speaker Ali Larijani said earlier this week. “The opening of the Book Garden is a big cultural event in the country, so that our children can make better use of this cultural and academic opportunity,” Tehran Mayor Mohammad Baqer Qalibaf added.

It was a long time coming. The idea for the Book Garden was first pitched in 2004 as a way to cater to fans of the city’s annual International Book Fair year-round. Construction on the center wrapped up last spring, and organizers spent the past few months stocking it with books. More than 400,000 titles are available for kids alone. One part of the center even has shorter shelves so youth can reach books better.

It looks to be a marvel of  design and engineering as well: 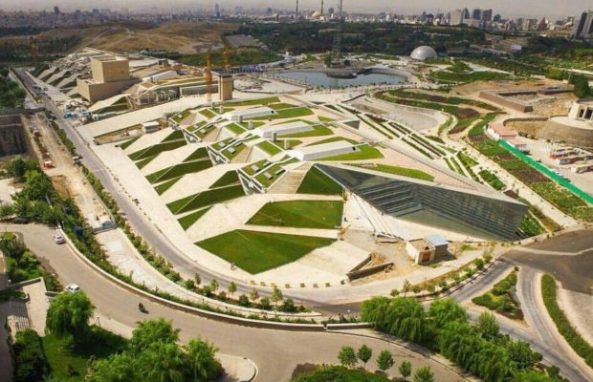 More impressive than the structure itself is the very idea of it: the Iranian government is notoriously totalitarian when it comes to art and media:

Iran has censored its literature for years, making publishers submit their books to the government so it can check for inappropriate content before publication. As such, a number of works have been banned, among them Dan Brown’s The Da Vinci Code, James Joyce’s Ulysses and Tracy Chevalier’s Girl With a Pearl Earring. In addition, authors have been asked to avoid using terms like kiss, wine, drunk, dog and dance,according to The Guardian.

“Those responsible in the book industry should not let harmful books enter our book market on the basis that we let [readers] choose [what they want to read],” Ayatollah Ali Khamenei said in 2011. “Like poisonous, dangerous and addictive drugs which are not available for everyone without restrictions…as a publisher, librarian or an official in the book industry, we don’t have the right to make [such books] available to those without knowledge.”

There are some indications the policies have recently relaxed under President Hassan Rouhani, but some books are still on the blacklist, according to the Financial Times. Others are being sold underground.

It goes to show that, notwithstanding their government, Iranians are a creative and worldly people, as they have been for millennia. As a lover of books and Iranian culture alike, I look forward to maybe someday visiting this remarkable institution.