China is marking its entrance onto the world stage as a great power in an unprecedented way: the $4-6 trillion One Belt, One Road (OBOR) initiative, an extensive network of infrastructure — railways, roads, pipelines, and energy grids — that will link China with 65 countries across Asia, Africa, and Europe. By the time it is completed in 2049, OBOR will span 62% of the world’s population and 40% of its economic output. 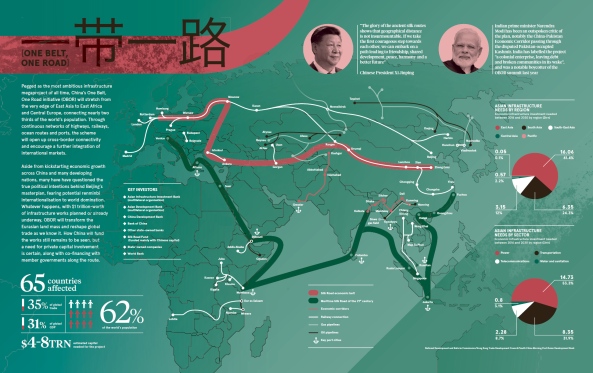 For a larger and more legible image, click here.

In addition to addressing a big infrastructure gap inhibiting the economic potential of the world’s biggest population centers, the main objective of this multi-trillion dollar project is to make China an unmatched leader in international economic and trade integration. (At a time when the United States is rapidly retreating from this role.)

With more cross-border commerce, migration, and interaction, China’s cultural and diplomatic clout will spread as well. OBOR could set the foundation for Chinese soft power, an area that remains dominated by the U.S. It can also create a market for Chinese finance, giving its currency, the renminbi, greater preference as a trade and reserve currency (another area where the U.S. remains the leader).

Case in point is the Asian Infrastructure Investment Bank, a Chinese-led institution that aims to provide billions in aid and economic development to countries across the world. Like OBOR, the AIIB is also designed to advance Chinese influence through the forging of commercial ties and investment. It counts 63 members countries, including most of Europe, plus 21 prospective members that include Canada and most of South America — the traditional spheres of influence for the U.S. (which has officially declared “no commitment” due to concerns about transparency and environmental standards).

Of course, a project of this scale and ambition is not guaranteed to fully materialize, especially with so many different parties and moving parts involved. In addition to the logistical challenges, there are also political obstacles, namely from fellow Asian heavyweight and potential world power India. China’s investment encroaches on maritime trade routes in the Indian Ocean, runs through disputed territories with Pakistan, and pumps money into countries India regards as part of its sphere of influence. OBOR also includes billions in development for archenemy Pakistan.

While it remains to be seen whether this project succeeds, one thing is for certain: China has big ambitions in the 21st century, and we can expect to see many more initiatives of this sort.