The United States’ relationship with Latin American has long been a fraught one, not least because the country historically regarded the entire hemisphere as being under its sphere of influence, subject to military interventions, orchestrated coups, and support for dictators.

But as The Economist reports, since the mid-1990s, following the end of the Cold War — and with it, most U.S. meddling — as well as the sweep of democracy and economic growth across most of the region, sentiments have warmed up quite a bit. 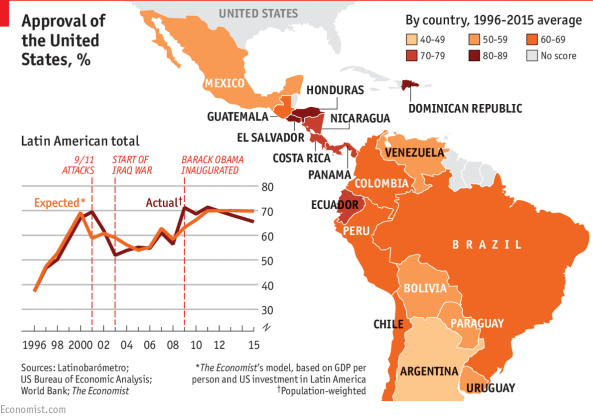 Interestingly enough, among the most enthusiastically pro-American societies are those that have been the most victimized by the U.S. historically:

The most recent survey by Latinobarómetro, a Chilean polling firm, found that 65% of respondents had a good or very good opinion of the United States. And the countries that seem to have the most cause for grievance feel least aggrieved: the two most pro-American nations in the region are the Dominican Republic (which the United States occupied from 1916 to 1924 and invaded again in 1965) and Guatemala (whose president was toppled in a coup organised by the CIA in 1954).

Does that mean that the United States should send the Marines back as goodwill ambassadors? A closer look at the past 20 years of polling suggests not. The region-wide view of the United States has oscillated considerably, from a low of 38% approval in 1996 to a high of 74% in 2009. Virtually all of these ups and downs seem to reflect changes in foreign direct investment (FDI) from the United States and changes in Latin American GDP per person. The more that American firms invest in Latin America, and the wealthier its inhabitants grow, the fonder respondents become of the gringos.

Another factor is geography: the closer a country is to the U.S., the more likely it is to have a positive attitude, reflecting how greater exposure and familiarity with a nation and its culture can usually lead to warm attitudes.

The most pro-U.S. Latin Americans also tended to be those where remittances — money sent back home from migrants in the U.S. — contribute significantly to the local economy; in El Salvador and Honduras, they make up over 15 percent of GDP.

No doubt, being able to make money in the U.S. and support loved ones back home is a positive selling point for America — though given today’s political climate, it remains to be seen in the next survey how long this will last.