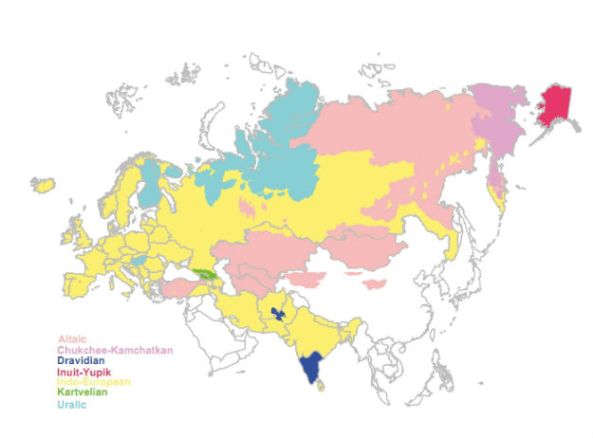 It is hard to imagine that the world’s many distinct and disparate languages, such as those highlighted above, share a common ancestor. But a new study reported in Foreign Policy  has ostensibly identified several words shared by at least three major Eurasian language families.

In research published by the Proceedings of the National Academy of Sciences, Mark Pagel, Quentin D. Atkinson, Andreea S. Calude, and Andrew Meade attempt to identify words shared between Eurasia’s major language families — implying that they may be relics of an older common tongue. Most words have a “half life,” meaning there’s 50 percent chance they’ll be replaced by a new noncognate word every 2,000 to 4,000 words. But some words — particularly numerals, pronouns, and adverbs — tend to last longer.

Using a database of hypothesized ancestor words, the authors looked for words related by sound within the language groups in the map above. (An example: The Latin pater is obviously related to the English father.)  They found “188 word-meanings for which one or more proto-words had been reconstructued for at least three language families”.

Among the shared words are the following:

The researchers have concluded that these common words prove the existing of linguistic “superfamily” that evolved from a common ancestor around 15,000 years ago. Interesting stuff.