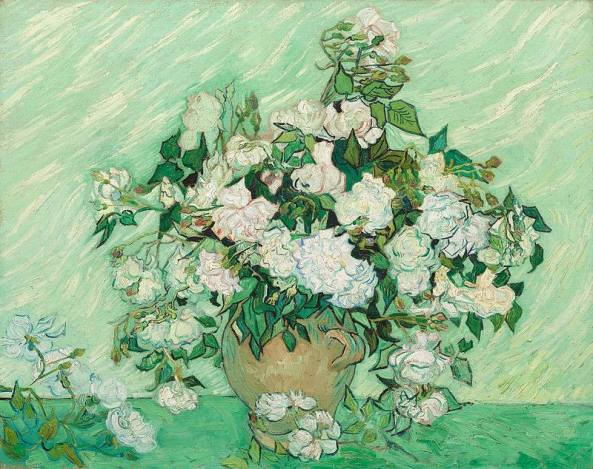 Still Life: Vase with Pink Roses by Vincent van Gogh. It was painted in 1890 while Van Gogh was preparing to leave the asylum in Saint-Rémy for the quiet town of Auvers-sur-Oise.

As his departure neared, he became increasingly optimistic about his future, as reflected in his choice of subject and colors: Van Gogh had a love for flowers of all kinds, and tended to paint them in his brighter moments. Vivid colors similarly reflected a more positive mood.

Around the time he was painting this piece, Van Gogh wrote to his mother that “but for one’s health … it is very necessary to work in the garden and see the flowers growing” and wrote cheerfully to his sister that “the last days in Saint-Rémy I worked like a madman. Great bouquets of flowers, violet-colored irises, great bouquets of roses”. He had in fact once recommended that his sister plant a garden so as “to find joy and meaning in life”.

Van Gogh’s love of flowers also tied into his appreciation for the importance of color. He once observed that “what color is in a picture, enthusiasm is in life”. For him, colors were a key way to convey meaning and emotion, and flowers were an opportunity to experiment with and explore a whole range of colors and color combinations. “Last year I painted almost nothing but flowers”, he wrote to his sister, “so I could get used to colors other than grey — pink, soft or bright green, light blue, violet, yellow, glorious red.”

Van Gogh associated pink and green with the spring season, and made the general observation that both nature and human feeling tended to change with the seasonal cycle of life. In this painting, among others, he displayed the pioneering technique of “simultaneous contrast” – two complementary colors of similar intensity being placed next each other to produce a strong sensory and emotional reaction. Van Gogh described this concept as a “wedding of two complementary colors, their mingling and opposition, the mysterious vibrations of two kindred souls”, and used the example of “pinks marrying the greens” – as in this painting.

Unfortunately, the optimism that inspired this piece would not last: it would be only a few months later than Van Gogh committed suicide following a rapid decline in his mental and emotional health. But it is incredible to consider just how much depth, meaning, and sophistication can be gleaned from a seemingly normal still life.

One comment on “Still Life: Vase with Pink Roses”