The 369th Infantry Regiment was an all-African American and Puerto Rican regiment of the U.S. Army that served with distinction in both World Wars. Prior to its formation, any black man wishing to fight in the First World War had to enlist in the French or Canadian armies; indeed, despite the disproportionately high turnout of African Americans to recruitment centers – many of whom wished to prove themselves to a nation that little of them, at best – the U.S. initially rejected them. But as the war grinded on and the Allies found themselves facing a shortage of manpower, the U.S. relented and formed a new regiment to be specially comprised of blacks and Puerto Ricans.

However, because many white Americans refused to fight alongside blacks and Hispanics, and often harassed and denigrated serviceman of color, the U.S. Army decided to assign the regiment to the exhausted and decimated French Army – albeit with a warning to the French that African Americans were inferior and prone to rape.

But the French – who had already enlisted hundreds of thousands of troops from their African, Caribbean, and Asian colonies – welcomed the regiment with open arms and treated them no differently than any other unit: they were issued French weapons, helmets, and gear (although they continued to wear their U.S. Army uniforms proudly) and fought alongside whites. They were not subject to any documented case of harassment or discrimination, and were nicknamed the Men of Bronze for their valor. 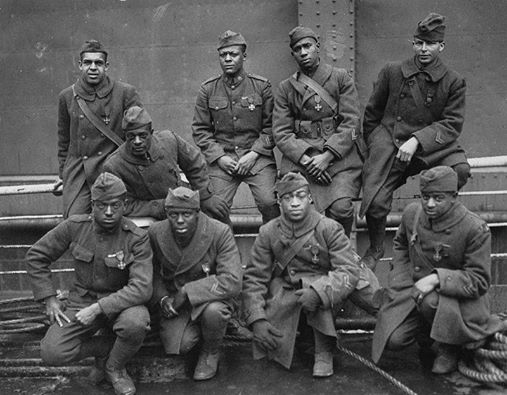 The Germans called the regiment the Hell Fighters and Black Rattlers for their resilience and the fact they never lost anyone to capture nor lost even a foot of ground in battle. They also directed several propaganda campaigns against them, emphasizing that the Germans had never done blacks any harm, unlike the Americans that degraded and hated them, and that they should turn against their U.S. masters. Such appeals only intensified the regiment’s patriotism and belief in the American and Allied cause.

In addition to serving in several key and pivotal engagements, such as the Second Battle of the Marne, the 369th earned the distinction of having the longest continuous deployment of any WWI unit: six months. By the end of the war, 171 members of the regiment had earned France’

s highest military citation, the Legion of Honor, among other decorations. The U.S. would eventually recognize two of them with Model of Honors, and several others with Distinguished Service Crosses, albeit most of them posthumous. Blacks and Puerto Ricans were not given the hero’s welcome they deserved, and would largely go unrecognized for their military gallantry until decades later.