According to The Economist, which cites data from the reputable Organization for Economic Cooperation and Development (OECD), the following countries offer the most generous government mandated parental leave. 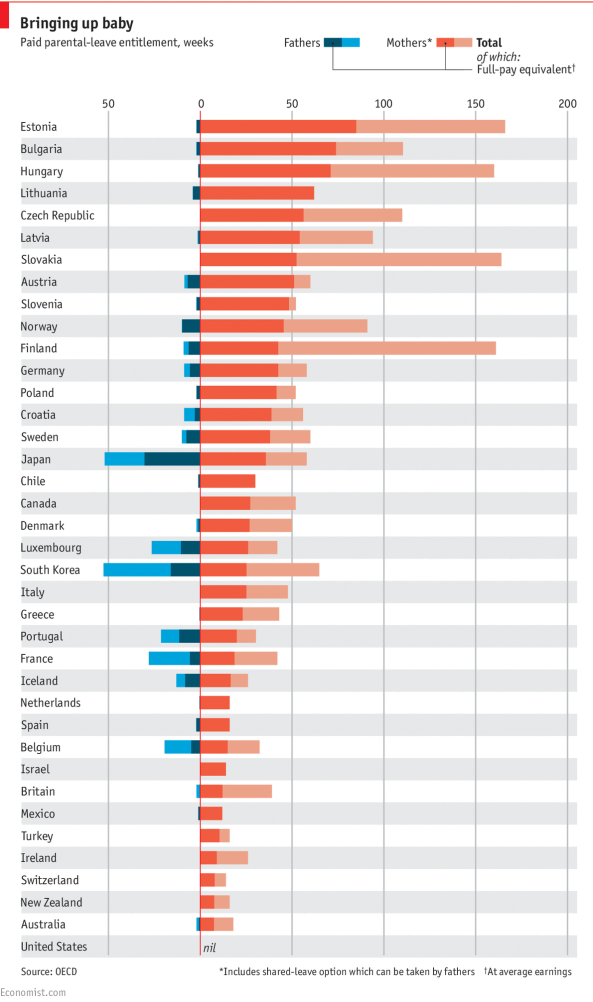 As The Economist points out, the countries giving the most to working parents are not Scandinavian — as many would assume given the famously generous Nordic welfare model — but the nations of central and eastern Europe, whose low birth rates and often high level of emigration have contributed to rapidly shrinking populations; hence their efforts to basically bribe people into having kids.

In Estonia and Hungary, for example, new mothers can stay at home for three years, receiving total pay equal to about a year and a half of the average salary. Among rich countries, Australia, Britain, Ireland and Switzerland are at the stingy end, offering mothers leave equivalent to three months or less of full pay.

Most OECD countries have some paid leave reserved for fathers as well, but only a minority offer longer than two weeks. Japan is most generous to men, giving them a full year at a rate equivalent to 34 full-pay weeks. But longstanding cultural stigma over paternal leave has limited this policy’s effectiveness: just 2% of new fathers in the country take it.

Plenty of other countries outside the OECD, such as Ukraine, Russia, and Singapore, also have “pro-natalist” policies that seek to incentivize having children. (Heck, Russia even has a state award called “The Order of Parental Glory“, which is given to parents that have raised large families.)

Just about every developed country (and quite a few developing ones, too) is facing a long term prospect of a stagnating and shrinking population, although the ones with more accepting immigration policies and/or relatively higher birth rates — such as Australia, Canada, France, Ireland, the U.S., and New Zealand — are projected to continue growing for several decades to come.

The U.S. is the only developed country without nationally mandated paid leave of any kind, although its demographic outlook is among the most favorable of any great power or developed country, due in no small part to the one million or so immigrants legally accepted annually.

However, Americans are also finding themselves increasingly hesitant to have children, especially economically hard-hit Millennials. And yet most countries with generous parental policies have not seen an appreciable rise in births, so it is still an open question whether introducing pro-family incentives alone will change much. Perhaps part of the reason is that it takes a lot more to raise a kid — let alone the minimum two per couple needed for stable population growth — than initial paid leave.