One of the most insidious and terrorizing elements of racism and white supremacy in the United States was lynching, broadly defined as an extrajudicial public execution carried out by a mob against an alleged criminal or transgressor. In most cases, the intention was not simply to mete out supposed justice in place of a court of law — not that the legal system in much of the South was any fairer or more impartial — but to enforce social control against particular groups, especially African Americans.

Montgomery, Alabama, which was the center of some of the worst racist atrocities and policies, will soon host one of the nation’s first and largest memorials to lynching, immortalizing the thousands of victims of racially motivated lynchings. (Appropriately, it will sit on the highest spot in the city, which was once the first capital of the Confederacy.)

The organization behind this effort, Equal Justice Initiative, has also put together a map of all the racial lynchings that took place across a  73-year period spanning the end of the post-Civil War Reconstruction Era to the beginning of the Civil Rights movement. 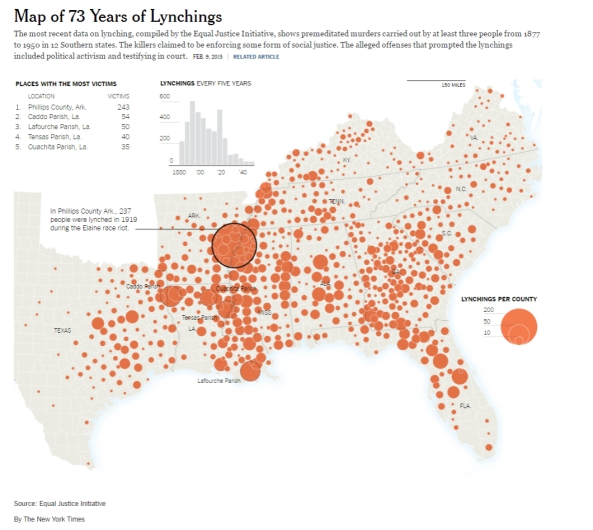 You can read more about the group’s efforts to document the more than 4,000 recorded lynchings here.

Needless to say, the director of the EJI, Bryan Stevenson, was on point when he stated that the group’s objective with the memorial is to “just to get people to confront the truth of our past with some more courage”. There is plenty of dark and uncomfortable truth to face up to, which is why the group will also be unveiling plans for a museum to open April 2017. Clearly, we need all the consciousness raising we can get.