This past spring, the Pew Research Center conducted a survey of over 40,000 people across 38 countries to find out how much they supported free expression, ranging from criticisms of the government to sexually explicit comments in public. The following map shows the results: 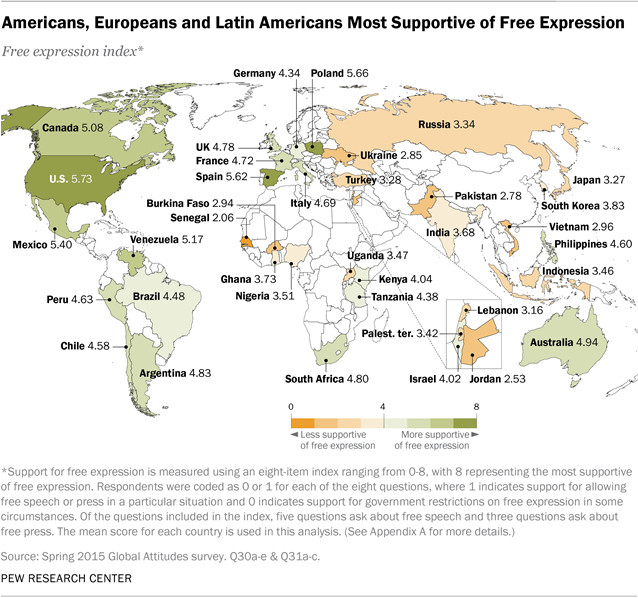 Here’s Vox’s take on the results:

Still, the 38 countries surveyed by Pew were broadly supportive of free expression — with a few exceptions. For instance, a global median of about 52 percent of respondents said the media should not be able to publish information that’s sensitive to national security issues. And respondents outside the U.S. generally seemed to favor restrictions on specific types of speech, including that which may offend religious or minority groups

Overall, there was a clear divide between east and west on this issue, with the former less supportive of free speech than the latter (and African nations being somewhat in the middle ground). Nevertheless, most countries were generally pro-free speech, with respondents expressing hangs ups mostly towards sexually explicit content or anything that may be offensive to certain ethnic or religious minorities. This was the case even in the U.S., which is generally more comfortable with political speech than with anything sexual.

Here is more insight from the Pew report:

While free expression is popular around the globe, other democratic rights are even more widely embraced. In Western and non-Western nations, throughout the global North and South, majorities want freedom of religion, gender equality, and honest, competitive elections. Yet the strength of commitment to individual liberties also varies. Americans are among the strongest supporters of these freedoms. Meanwhile, Europeans are especially likely to want gender equality and competitive elections, but somewhat less likely than others to prioritize religious freedom. The right to worship freely is most popular in sub-Saharan Africa. Across all regions, people who say religion is very important in their lives are more likely to value religious freedom.

Here is the visual breakdown of the results for each area of free expression.

Given that most of the countries surveyed have at least one large ethnic or religious minority — if not several, in the cases of the U.S., India, Indonesia, and Russia — it makes sense that potentially offensive remarks would be frowned upon; social harmony and cohesion is a major concern in many countries, for both historical and practical reasons. This sentiment would also account for why anything deemed potentially violence-inducing is also taboo.

Another area of broad global agreement concerns the government restriction of media reports that are deemed sensitive for national security — again, even freedom-loving countries tended to be lukewarm about this.

Overall, only 40 percent of  respondents believe that the media can report freely on sensitive issues related to national security, with a slight majority (52 percent) believing governments can and should curtail this information. Once again, there  were regional and national differences: Latin Americans and Europeans were more open to allowing the publishing of sensitive security information than those living in the Middle East, Asia, and Africa. For its part, otherwise freedom-loving Americans support government intervention in this area by a wide margin — 59 percent believe the government should be free to stop publications if deemed of vital national interest.

So it appears that besides supporting social cohesion, via restrictions towards offensive religious and ethnic speech, national security is another area for which most societies would be willing to limit freedom of expressions. It goes to show how important safety and harmony are to humans as a whole, albeit to varying degrees.

When it came to the newest and most fraught battleground for freedom of expression, the Internet, the majority of respondents in most countries supported uncensored Internet — including societies with minimal web access.

Nonetheless, countries with the most Internet usage were unsurprisingly likelier to have stronger support for Internet freedom. Pew predicts that as web access continues its rapid proliferation across the globe, this support for a freer cyberspace will continue to grow.

There is a lot more to sift through in this dense and informative report, so I highly encourage you to read the rest of it for yourself. It is encouraging to see that, on the whole, most people in the world support the principles of freedom and liberty. Yes, it varies widely by country and the form and content of expression. But the broad trend towards supporting this more important of rights seems clear.

What are your thoughts about the results?