Some of the largest and most sophisticated fortresses in the Western Hemisphere can be found in Haiti, of which the most famous is Citadelle Laferrière. Located in the north of the country, this defense network was built not by the powerful French Empire that ruled this lucrative colony with an iron first, but by the newly freed Haitians themselves.

Shortly after achieving independence in the early 19th century, Henri Christophe, a former slave and key leader in the Haitian Revolution, briefly took control of the northern part of the country as a self-appointed king. Like most Haitians, he knew full well how shaky the country’s newfound freedom was: it was second only to the United States in liberating itself from European colonialism in the hemisphere. It was history’s first successful slave revolt and first black republic, having managed to fight off three leading powers (France, Britain, and Spain). Needless to say, these factors did not endear the Haitians to the European-dominated global system.

Moreover, having been the world’s most valuable colony, thanks to its highly sought-after sugar crop, the Haitians expected France or another power (including the U.S.) to make an attempt on recapturing its billion-dollar economy. 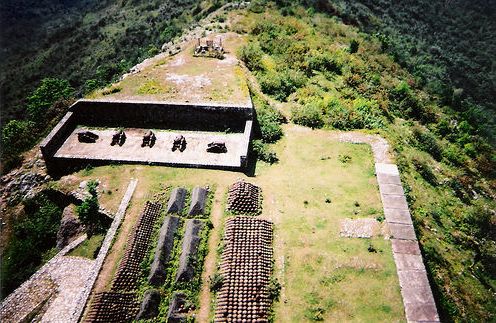 Hence projects like Citadelle Laferrière, strategically placed along the part of the country facing the Atlantic (e.g. the U.S. and Europe). A UNESCO World Heritage Site and an enduring national symbol of Haiti, it spans 108,000 square feet atop a 3,000-foot mountain. The complex was designed to accommodate over 5,000 defenders for at least one year, and included a palace, troop quarters, gunpowder room, stockpile of cannonballs (still present), bathing rooms, and a bakery.