As a nation of immigrants, it is not surprising that the United States adheres to a concept of citizenship known as jus soli, or birthright citizenship, whereby anyone born on American soil is automatically a U.S. citizen — regardless of their parents’ legal status. My making it easier for people to become politically and civically integrated after just one generation, the U.S. has been able to harness the ideas, skills, and labor of the world, whilst also securing the loyalty and contributions of millions.

Birthright citizenship has been (an albeit controversial) bedrock of U.S. law and identity since the mid-19th century, around the time that immigration kicked into high gear. Before the U.S. Civil War, African Americans — even those freed from slavery or born to freed slaves — were emphatically not citizens; the Supreme Court ruled as such in Scott v. Sandford in 1857.

Only with the ratification of the Fourteenth Amendment in 1868 — one of the three post-Civil War “Reconstruction Amendments” that greatly expanded political rights — were “all persons born or naturalized in the United States…citizens of the United States and of the State wherein they reside”, to quote the first sentence of the amendment.

While the language of the amendment made it very clear that black Americans would enjoy U.S. citizenship, things weren’t so cut-and-dry for other groups. In particular, it did not address the status of Native Americans born on reservations, which were and remain legally sovereign entities (a very complex arrangement that is often subject to disputes to this day). And what about children born to Chinese immigrants, who were explicitly prohibited from being naturalized citizens via the 1882 Chinese Exclusion Act.

Most questions were settled in the 1898 Supreme Court case United States v. Wong Kim Ark, which codified the common law concept of jus soli as part of the Fourteenth Amendment. According to the Congressional Research Service, an arm of the Library of Congress:

The Court held that the Fourteenth Amendment affirmed the traditional jus soli rule, including the exceptions of children born to foreign diplomats, to hostile occupying forces or on foreign public ships, and added a new exception of children of Indians owing direct allegiance to their tribes. It further held that the ‘Fourteenth Amendment … has conferred no authority upon Congress to restrict the effect of birth, declared by the Constitution to constitute a sufficient and complete right to citizenship’ and that it is ‘throughout affirmative and declaratory, intended to allay doubts and settle controversies which had arisen, and not to impose any new restrictions upon citizenship.”

Birthright citizenship was excluded only for the children of diplomats and hostile military occupies, as well as for children born on “foreign public ships”. Native Americans born on reservations were ruled ineligible for birthright citizenship, as their tribal sovereignty left them outside of U.S. jurisdiction. The passage of the Indian Citizenship Act in 1924 granted most of America’s indigenous population full U.S. citizenship, with the Nationality Act of 1940 “finally and unambiguously” declaring all Native Americans born in the United States to be citizens.

But despite the long and fleshed out precedent of birthright citizenship, as well as its affirmed Constitutional status, it remains a highly contentious concept amid the on-and-off debate about illegal immigration. Many Americans do not even know that anyone born in the country (or born overseas to at least one U.S. citizen) is automatically granted citizenship; and of those who do know, a large segment grumbles about getting rid of the idea altogether.

Indeed, jus soli is a pretty radical concept by global standards; of the world’s 194 countries, only 30 grant automatic citizenship to children born on their territory, even if their parents are not legal citizens or residents. Note where they are all located. 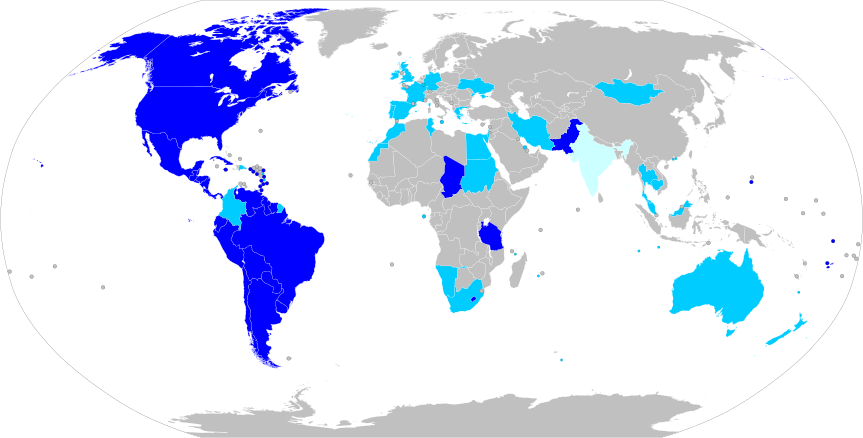 In essence, the norm for most countries is to make citizenship conditional on other factors, namely naturalization (living in the country for a certain span of time) or through inheritance of one or both parents’ citizenship (called jus sanguinis, or “right of blood”).

Of course, there remain a range of other variables specific to certain countries; Costa Rica requires registration with the government before the age of 25, while Tunisia requires registration before age of 20, provided that your father and grandfather were born in Tunisia, too. India, which once had unrestricted birthright citizenship, had steadily introduced more and more limitation beginning in 1987, culminating in outright abolishment in 2004 due to concerns about overpopulation.

Like immigration, citizenship is a contentious issue in many countries, subject to frequent debates and policy changes. This is especially now that global migration is at an all-time high. It is also interesting to note that many of the countries with the largest number of immigrants (such as Germany, Russia, Saudi Arabia, and the United Arab Emirates) or with the highest rate of immigration (Lebanon, Qatar, Jordan, Singapore, and Cyprus) are to varying degrees difficult places to be citizens of. As obviously interrelated as the issues of immigration and citizenship are, their intersection is complex and sometimes irrelevant (i.e., many migrants aim not for joining a country but for temporary economic opportunities).

Still, birthright citizenship does inform us somewhat of the civic nature and political ideals of certain countries. The U.S. presents a clear case, being that it was founded (in theory, if not quite in practice) upon universalist values of freedom and opportunity. Many Latin American countries, which became independent shortly after, similarly tried to emulate such notions.

There were of course practical reasons, too; these new states often had lots of territory and natural resources, but not enough people to secure or make use of them. Fear of annexation from neighbors, or of hostility from indigenous peoples, were ever-present concerns. Making it easier and more enticing for people to settle these vast lands, till the fields, and mine the minerals would bring a lot of long-term prosperity and power (especially once slavery was abolished; hence why immigration tended to escalate shortly after a given country ended the practice).

Thus, it is no coincidence that the largest but least densely-populated states, such as Canada, the U.S., Argentina, and Brazil, were the ones more amicable, both culturally and politically, to new arrivals (again, this is relatively speaking, since xenophobia was no doubt still rife in each of these cases, especially towards Asians and Africans). Most of these young countries can credit their success, if not their very existence, to the human capital that they allowed in largely unabated.

Indeed, according to Jared Diamond, if the application of jus soli had been abolished over 150 years ago, before the height of immigration to the “New World”, 60 percent of Americans and 80 percent of Argentinians would lose their citizenship.

It is interesting to consider how citizenship will change in a world facing both increasing globalization and a counter-push towards nationalism and border restrictions. What will it mean to be a citizen of a country? How and why will this be extended, and to whom? What are your thoughts?