Advances in technology, ranging from the 19th-century cotton gin to the latest cutting-edge robots, have long been cited as leading factors in the decline of both employment and quality of work. But a recent study from Deloitte, a major consultancy based in the U.K., has challenged this common narrative, arguing that on the contrary, technological innovations have created far more jobs — and far better lives — than are credited.

Their conclusion is unremittingly cheerful: rather than destroying jobs, technology has been a “great job-creating machine”. Findings by Deloitte such as a fourfold rise in bar staff since the 1950s or a surge in the number of hairdressers this century suggest to the authors that technology has increased spending power, therefore creating new demand and new jobs.

Their study, shortlisted for the Society of Business Economists’ Rybczynski prize, argues that the debate has been skewed towards the job-destroying effects of technological change, which are more easily observed than than its creative aspects.

“The dominant trend is of contracting employment in agriculture and manufacturing being more than offset by rapid growth in the caring, creative, technology and business services sectors”, they write.

“Machines will take on more repetitive and laborious tasks, but seem no closer to eliminating the need for human labour than at any time in the last 150 years”.

Citing a century-and-a-half of historical data from the U.K., the researchers found a precipitous decline in “hard, dull, and dangerous” work — such as agriculture and clothes washing — to less physically intensive jobs focused on “care, education and provision of services to others”.

This profound switch from physical to mental/emotional jobs is best captured in the following graph. 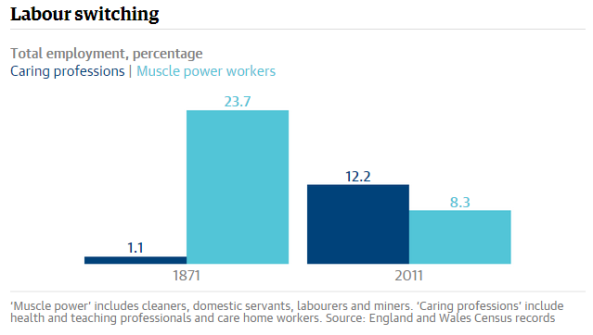 While this is data limited to the U.K., insofar as that country kicked off the Industrial Era and followed through (if not led) these trends, it is more or less an accurate measure of the overall development of the industrialized / developed world.

It found a 909% rise in nursing auxiliaries and assistants over the last two decades. Analysis of the UK Labour Force Survey from the Office for National Statistics suggest the number of these workers soared from 29,743 to 300,201 between 1992 and 2014.

In the same period there was also a

On the other hand, there was a

The study also cites the rise of services such as hairdressing as a sign that people are enjoying more leisure and luxury than ever before. We no longer need to spend countless hours growing our own food, weaving and maintaining our own clothes, and so on. Products ranging from essentials like food to appliances, automobiles, and smartphones are cheaper and more plentiful than when they first entered the market.Granted, these observations are nothing new. Many people, particularly in the context of arguments about inequality and poverty, point out that most people, even the poor and under-paid, have never had it so good. The difference here is that the researchers are looking into technology’s role in such developments, and finding that it has had no negative effect on employment or job quality.

However, it is hard to separate technology from the overall equation. It is one thing to invent or innovate a solution; how we implement and utilize them are a different story. While technology has freed many people from the drudgery of laundry, farming, mopping floors, etc., it has traded those bad jobs for others: fry cooks, retail associates, domestics, and so on.

And even though today’s agricultural workers, custodians, and cleaners have it relatively easier than their historical counterparts, they are still very often underpaid, poorly treated, and even outright exploited. Technology has not made the lives of third world garment makers and factory workers any less miserable. (At best, they are marginally better paid, but even this is small comfort given the tremendous potential gains being denied to them.)

Moreover, a lot of the hairdressers, accountants, caregivers, and other professions that have emerged are not necessarily any better off in terms of income or treatment. Depending on a range of factors, from where one lives to how much experience they have in a given field, pay for teachers, social workers, and the like can be abysmal.

Although we certainly live better lives than our ancestors, this is a moot point; we should be looking at how much better our lives could be if the efficiency and productivity gains of technology are better allocated to the masses. The vast and rapid accumulation of wealth that has resulted from innovations in technology, logistics, and business administration has not gone to most workers; rather, it is concentrated among the owners, executives, investors, and shareholders of the companies that implement them.

To be sure, those involved in the designing, building, and maintenance of these devices are, generally speaking, well paid and treated. But they represent a small portion of the labor force. A big reason we see job growth swelling in low-paying and often-miserable sectors like fast food and retail is because there is so little else for most people to do that pays well. With the continued proliferation of technology, there will be even less for people to do, even among low-paying sectors (especially with businesses effectively extorting people into keeping quiet about better pay and treatment lest their jobs get automated).

And as one of my friends, Rafael, observed when commenting on this article, the past and present progress in technology is not an accurate way for predicting the future course of automation.

The idea that tech has always created more jobs than it destroyed in the past and so it will continue on like that into the future is a major logical fallacy.

Tech is going to be destroying millions of jobs in the next 10-15 years. And it most defini

tely will not be creating that many jobs. That’s because this tech is qualitatively different than any other tech advancement. We’re talking about robots that can replicate human dexterity and certain forms of intelligence.

We have to face the reality that there won’t be enough jobs for everyone to do.

Indeed, it is one thing for machines to be used as tools to enhance the speed and efficiency of a job. It is quite another when said machines become advanced enough to replace more complex and transactional jobs, such as accounting, banking, and even sales. Who is to say we will not reach a point when robots and computers start eliminating the comparatively fewer things we have left to do?

Rafael, among other commentators to this piece, believes that such a development is precisely why a universal basic income (also called a guaranteed basic income) is an inevitably. What choice will we have as millions more people find themselves with no employment prospects? How else will they survive in a world of hyper-efficiency?

If not a basic income, then at least a cultural and economic system that makes most, if not all, work sustainable and well-paying. Given the amount of capital out there, it is totally feasible to have a world where everyone from street sweepers to executives can enjoy life-sustainable employment. If what you are doing is clearly needed (hence why you were hired) why shouldn’t it pay well given the lack of any alternative (i.e. there is only so much need for managers, tech experts, etc.).

In short, all the technological and scientific achievements in the world will not make up for the pervasive greed and selfishness that continues to deprive these gains from the majority of humanity. It is great that we have come a long way thanks to a lot of hard work and creativity, and that many more positive developments are to come. But so long as our cultural, economic, and political systems conspire to make these innovations beneficial only to a few, they will matter little.