It is widely known that the world population is growing at a rapid rate. Following over 200,000 years of existence, modern Homo sapiens reached one billion only in the 1800s. But since then, our numbers have increased with unprecedented rapidity, growing more than seven fold. 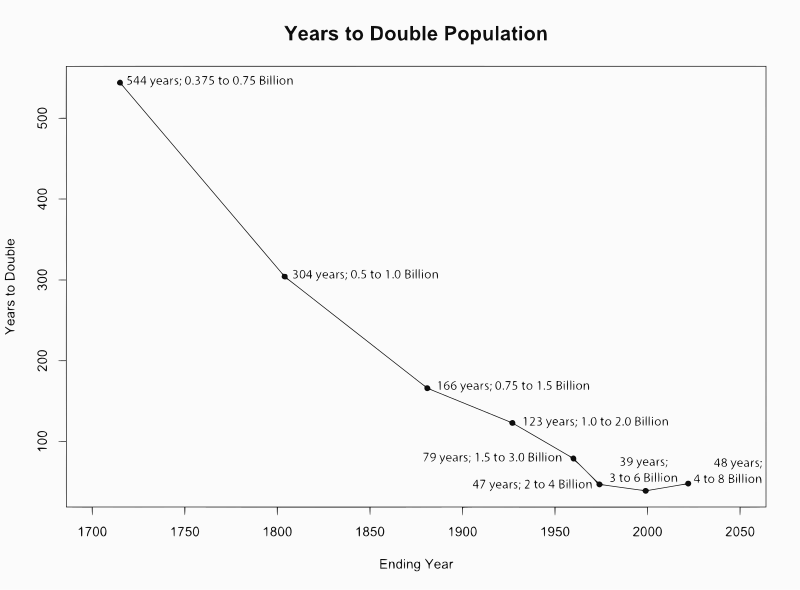 As the following chart from NPR shows, this growth will be highly uneven: the bulk of it will occur in Africa and the Indian subcontinent, whereas Europe and a large chunk of Asia (particularly China, Japan, and South Korea) will actually lose population. North America, South America, and Oceania will remain relatively stable.

Moreover, India will surpass China as the world’s largest nation, and by quite a margin. This will have implications for both countries’ status as world powers: will China but able to sustain its economic rise amid a shrinking and aging population? Will India, for that matter, but able to make the most of its youthful and growing populace, or be burdened by the demands? 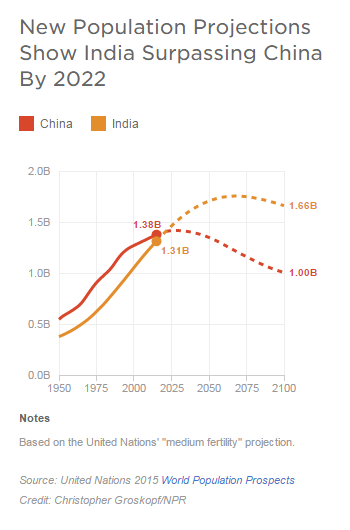 NPR explains what accounts for this unprecedented population boom:

“The reason is that fertility rates are not falling as fast as previously anticipated,” says Robert Walker, president of the Population Institute.

The population growth in Africa is also being driven by improvements in health. Fewer kids are dying, AIDS is no longer a death sentence and Africans are living longer than ever before.

So in essence, this is a good sign. Just as previous population booms marked advances in public health, economic growth and technology (namely in agriculture and medicine), so too does this higher-than-anticipated boost reflect the changing prospects of one of the world’s fastest-growing economic centers. So long as governments invest in their populations — in areas like education, healthcare, and housing — they can make the most of their growing number of citizens, rather than be burdened by them. More people means potentially more workers, inventors, and innovators.

Of course, with the amount of fresh water, arable land, and other resources becoming strained, the mostly poor countries facing this growth will be even more hard-pressed to sustain such growth. Allocation is often more of a problem than scarcity; there is plenty of food, for example, but it is often wasted or put to less than optimal use (i.e. for feeding livestock in place of people). Better global and national distribution systems, together with advances in energy and agriculture, can feed our growing numbers. The equally unprecedented rate of urbanization will reduce the strain on the environment, though again this assumes better urban planning and more efficient energy use and infrastructure.

The uneven growth will also affect the power dynamics of the international system; as the long-established power blocs of Europe and East Asia endure the burdens of an aging and declining population, will fast-growing Africa and South Asia take the reigns? What about those nations that will continue to grow in a more balanced fashion, such as the Australia, Canada, France, the U.K., and the U.S.?

The countries in green presently have a fertility rate “sweet spot” — just the right amount of growth to avert decline but without being too rapid and difficult to sustain. Note that some of the blue nations, like Australia and Canada, are projected to enjoy rapid growth due to favorable immigration policies.

Barring any unanticipated increase in birth rates — which is by no means a foregone conclusion, given that some countries like Germany and Russia are seeing higher fertility — countries with low fertility rates will need to turn to immigration to make up for the loss in population (or more dramatically, rely on technology to make up for the labor shortage). Big changes will need to be made in economic and social security systems to support the large number of non-working elderly; then again, advancements in health and medicine mean people are not just longer lived, but less susceptible to debilitation and illness.

In a more globalized world, unaffected by nationalism and xenophobia, the swelling populations of the developing world could migrate to those countries in need of human capital. The wealth and resources being concentrated towards the relative handful of industrialized nations (and in turn their elites), could fund the multitude of advancements needed to make the most of this growth: housing, education, and other public goods. With better and more equitable distributive systems, creativity, and political will on an international scale, Earth can sustain all this growth (especially now that we have the logistics and data to see it coming).

Granted, all this might be a moot point. Projections have changed many times before, and there is no telling what the future holds. But needless to say, this is an important matter to reflect upon and discuss, especially given the growing challenges posed by climate change, increasing inequality, and fossil fuel depletion.