The Internet, e-books, and Amazon are widely seen to portend the end of physical bookstores, if not books themselves, as we know it. As a lifelong bibliophile, I always found this concern unconvincing, albeit with an obvious bias: new technologies, products, and media will always shake up and change old ones, but rarely is anything completely eliminated.

Rather, some sort of equilibrium is eventually established, wherein people continue to use old and new media for different reasons, or even in a complementary way; consider the propagation of radio via web streaming, for example. This isn’t to say that some forms of media do not decline or get phased out instead of adapting; oral traditions, once ubiquitous across cultures, has clearly taken in a hit since the introduction of writing and the later spread of literacy and printed works.

But for books and those that sell them, the future thus far looks secure, even if it is not what it once was. A surprising finding by NPR shows that brick-and-mortar book vendors are hanging on and even growing in number.

While stores…continue to struggle, independent bookstores overall are enjoying a mini-revival, with their numbers swelling 25 percent since 2009, according to the American Booksellers Association. Sales are up, too.

Remarkably, it’s a revival fueled, at least in part, by digital natives like 23-year-old Ross Destiche, who’s hauling an armful of books to the register. “Nothing matches the feel and the smell of a book,” he says. “There’s something special about holding it in your hand and knowing that that’s the same story every time, and you can rely on that story to be with you.”

The book also has fans from other unexpected quarters. David Gelernter, a professor of computer science at Yale, pioneered advances like “parallel computation,” yet he admires the brilliant design of the codex. “It’s an inspiration of the very first order. … It’s made to fit human hands and human eyes and human laps in the way that computers are not,” he says, wondering aloud why some are in such a rush to discard a technology that has endured for centuries. “It’s not as if books have lost an argument. The problem is there hasn’t been an argument. Technology always gets a free pass. … [People] take it for granted that if the technology is new it must be better.”

But is a digital book “better” than a printed one? The research is mixed. Some studies find we absorb less material digitally while others find no discernible difference. One thing that is clear: “We are not only what we read but how we read,” says Maryanne Wolf, a professor at Tufts University and author of Proust and the Squid: The Story and Science of the Reading Brain. 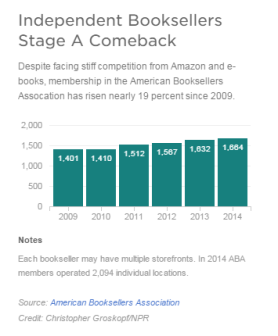 There will always be traditionalists or diehards who seek to resist any changes that threaten the media they know and love. Yet clearly people have deeper reasons for supporting books and bookstores than visceral attachment to what is familiar. The fact that digital alternatives are often dominated by (or perceived to be dominated by) big businesses like Amazon in an age of wariness towards corporations is another factors; supporting the humble book (albeit hardly any less “corporatized” than digital media) is a way to defy the intrusion of big companies in yet another product, service, or area in our lives.

All those motives aside, there are practical considerations too:

Wolf is no Luddite: She fully embraces what she calls the “bi-literate brain,” one equally at home in the digital and analog worlds, but warns that e-readers can deceive us. One study found that young students, digital natives, absorbed material better on paper than on screen, even though they were convinced the opposite was true. That’s why she balks at a move toward hybrid reading devices, ones that are part digital and part paper. Better, she says, to retain the unique advantages of both technologies.

Publishers seem to agree. They’ve begun to embrace the “bookiness” of their products.

“The books just look better,” says paper industry analyst Thad McIlroy. He notes that publishers are paying more attention to such tactile qualities as a book’s cover and the quality of paper. “Those are the kind of things that are going to keep books with us for some time to come.”

I for one come down on both sides: I have an e-reader I absolutely love that is stocked with books and especially magazines; it helps me save space and paper, and spares me from stacks or stuffed bins full of subscriptions. But at the same time I cannot help my attraction to a physical book: its look, feel, smell, and even presence (no word on the taste yet). Sometimes mere practicality determines which medium I choose: I have found some physical books cheaper than their digital versions, and visa versa, and depending on how much I care for the physical qualities, I just go for what is more affordable regardless.

Then there is the less talked about but equally growing realm of audiobooks, which I also love and use. Aspects of modern life, like long commutes and strained free time, make listening to a book both a necessity and a practical escape during the times you need to be productive or doing something else. It is a nice compromise, and yet another valuable and practical way to get the knowledge and/or entertainment of a book in a palatable format. It is good to have so many options.