College graduates are spending more and more years — and money — to get worse and worse entry-level jobs. That is the grim conclusion from this recent report from The Atlantic:

The majority of young people aren’t graduating from a four-year university. Rather they are dropping out of high school, graduating from high school and not going to college, or dropping out of college. Millennial is often used, in the media, as a synonym for “bachelor-degree-holding young person”, but about 60 percent of this generation doesn’t have a bachelor’s degree.

And how are they doing, as a group? Young people don’t seem to have a jobs problem—their jobless rate is a bit elevated, but not alarmingly so. Rather they have a money problem. The jobs they’re getting don’t pay much and their wages aren’t growing. A recent analysis of the Current Population Survey last year found that the median income for people between 25 and 34 has fallen in every major industry but healthcare since the Great Recession began.

Again, it is not that young degree-holders are having a hard time getting employed — on the contrary, they still have a better chance of finding a job than those of any age without degrees. It is that the quality of their work — in terms of pay, growth prospects, treatment, etc. — is poor and not corresponding to their skills and investment in education. It is under-employment rather than unemployment that is the big issue.

As usual, a visual of this trend speaks greater volumes: 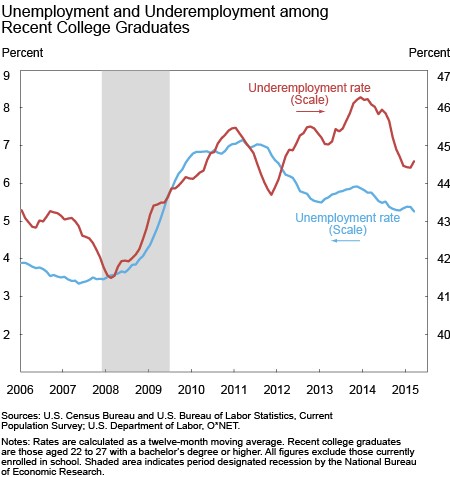 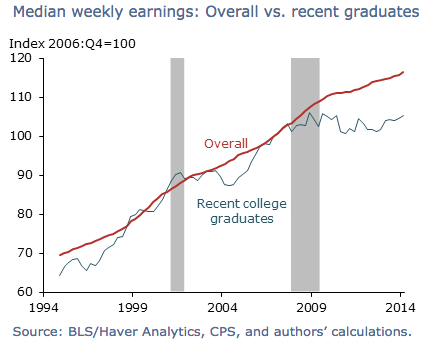 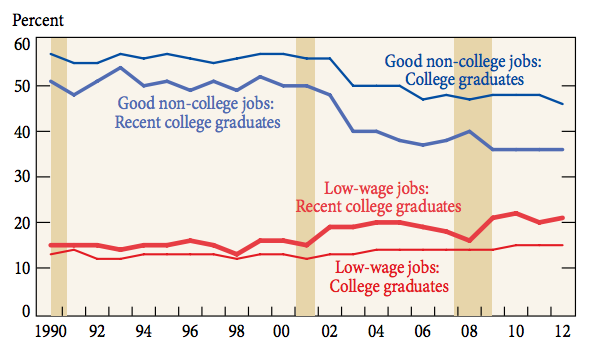 Imagine putting all that time, energy, and effort into increasingly-expensive schools, only to get thrown into an unrewarding and stagnating jobs market.

And before anyone responds with the usual refrain that young people should not have gone into overpriced school in the first place, I ask: what is the alternative? Vocational and technical schools are less common and often just as expensive, and in any case plenty of specialists are underpaid too. What other avenues are available, given that the average grad’s awful predicament are actually comparatively better than that of most others?

As the article concludes:

Today’s young-person problem does not seem to be about a lack of jobs or a lack of participation. It is, rather, a lack of good jobs, a dearth of raises, and a shortage of opportunities for this historically educated generation to put its historic number of degrees to work.

And this suggests, to me, a deeper concern: Even after the best year for job creation this century, and even after the longest private-sector expansion in modern history, the U.S. economy doesn’t quite know what to do with all these young people.

This is not proof that people shouldn’t go to college! (People who skip college are getting obliterated in this economy.) It is, rather, evidence that college is looking more and more like a disaster insurance policy for your career. A four-year degree confers economic benefits relative to your less-educated peers among a young cohort that’s facing absolute declines.

For all its improvements, the labor market is just not creating enough high-quality jobs for young people to absorb all of these newly minted college grads in jobs that are historically “college jobs”. In the long run, there are plenty of reasons to expect the most educated generation in American history to do awesome things in their 30s. But in the meantime, get used to the most brilliant generation of baristas, salespeople, and waiters in American history.

You can read more about this grim issue here.

Basically, we are creating a lost generation, a future inherited by people made poorer, over-worked, more anxious, and cynical by an unfair and exploitative economic system. Though corporate profits continue to grow, less and less of that money is going to average workers, regardless of their skills. For all the talk of Millennials being lazy, over-indulgement, and self-entitled, it is those in the upper echelons of power — overwhelmingly much older — who are making it harder for young people to succeed the way they had. The resources are there, but the will and empathy are not.

And that is the elephant in the room not touched on by this and most other analyses of the problem. Just why isn’t the labor market creating enough high-quality jobs for young people (and indeed people in general)? Again, businesses have the revenue, and the demand for many of these jobs is clearly high. And is it really likely that young people will finally be able to unlock their economic potential by their thirties, as the article optimistically asserts? Sure, that could be the case, but then what? We have to endure a decade of immiseration along the way? Why should that be the case if the resources are currently available now?

Some questions to reflect on concerning the nature of American business culture and economy.