The bookwheel (sometimes called a reading wheel) is a rotating bookcase that allows one person to easily read a variety of heavy books in one location. The books rotate in a manner similar to a water wheel, rather than on a flat table surface (the Chinese apparently invented the horizontal variety over a thousand years ago).

The first and most well-known bookwheel design was featured in a book by 16th century Italian engineer Agostino Ramelli (which was delightfully titled “The Various and Ingenious Machines of Captain Agostino Ramelli”). Other inventors like Nicolas Grollier de Servière proposed their own variation this concept. Interesting, while his design inspired other bookwheels, Ramelli himself never constructed his own. Below is his original illustration. 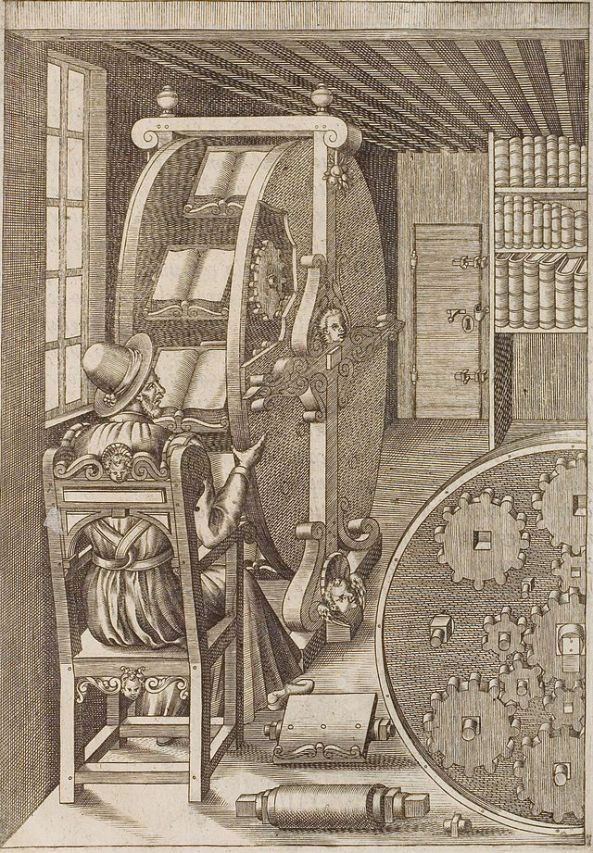 Ramelli’s concept was deliberately complex, utilizing all sorts of gears and mechanics previously found only in clocks; this was because he wanted to display his mathematical and engineering skill. Ramelli described his invention as a “beautiful and ingenious machine, very useful and convenient for anybody who takes pleasure in study, especially for those who are indisposed and tormented by gout [a form of inflammatory arthritis especially common among the wealthy].” However, it is disputed to what extent it was purchased for its practical purposes rather than its unusual and aesthetic properties.

In any case, the bookwheel was an early attempt to solve the new problem of managing printed works, which were emerging in greater numbers due to the rapid spread of the printing press (books back then were far larger and heavier). Thus it is considered one of the earliest “information retrieval” devices – akin to modern technologies like hypertext and e-readers – that allow readers to store and cross-reference large amounts of information.

Nowadays, the bookwheel is valued for its historical importance, decorative appeal, and symbolic significance, making the rise of mass data and media. I would certainly love one as well.