A stolperstein (German for “stumbling block”) describes one of several monuments created by German artist Gunter Demnig that commemorate a victim of the Holocaust. Stolpersteine are small, cobblestone-sized memorials for an individual victim of Nazism. The idea apparently arose from an old custom among non-Jewish Germans, who, upon stumbling over a protruding stone, would say, “There must be a Jew buried here.” A stolperstein is intended to similarly divert one’s attention.

Demnig manufactures a concrete cube of four inches that he covers with a sheet of brass and stamps with the following details: the name, year of birth, and fate, if known. The stolperstein is then laid flush with the pavement or sidewalk in front of the last residence (or sometimes workplace) of the victim. The costs are covered covered by donations, collections, individual citizens, contemporary witnesses, school classes, or communities. 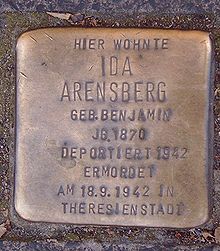 As one historian noted: “It is not what is written [on the stolpersteine] which intrigues, because the inscription is insufficient to conjure a person. It is the emptiness, void, lack of information, the maw of the forgotten, which gives the monuments their power and lifts them from the banality of a statistic.” Simply seeing them in pictures, I can concur.

Here are a few more examples, many of which can be found in cities across Europe — a grim reminder of the Holocaust’s scope and scale.

You can read more about these powerful artistic works here.