As the cradle of western civilization and one of the most advanced societies known to have ever existed in the ancient world, it is little surprise that the ancient Greeks excelled in one of the key marks of an advanced civilization: art and cultural expression. Courtesy of the BBC are ten works that are noteworthy for their innovation and impact both at the time and for centuries after.

Sculpture of a fallen warrior from the temple of Aphaia at Aegina. Photograph: Print Collector/Getty Images.

There is a tragic pathos to this mighty sculpture of a dying hero from a temple on the Greek island of Aegina. Tragedy is a Greek concept. The tragedies of Sophocles, Euripides and Aeschylus are still performed. This statue shows a strong man fallen, heroic to his last breath.

Classical Greek art changed rapidly as Greece itself went through wars and imperial transformations. In what is called the Hellenistic age it became much more emotional, sensual and even sensationalist. The furious sculptures on the Pergamon altar – which can be seen in its own museum in Berlin – are full of passion and psychological drama.

One of the two Riace bronzes: the Warrior Photograph: Alinari Archives/Alinari via Getty Images.

These tremendous statues found in the sea off southern Italy in 1972 are important because so few original Greek bronze statues survive. Most of the classical nudes in museums were carved in marble in the Roman era, as reproductions of such rare, and now largely lost, originals. Here we see the true majesty of Greek art in its classical age, which occurred in the fifth-century BC.

Goddesses from the east pediment of the Parthenon (c 438-432BC)

Three goddesses from east pediment of the Parthenon. Photograph: ©The Trustees of the British Museum.

Sitting and reclining in graceful unison, these goddesses carved in marble for the Parthenon in Athens are among the most beautiful and mysterious images of the human form ever created. Incredibly, the artist makes the draperies that cover their bodies as real and richly textured as similar garments painted by Leonardo da Vinci a millennium later – and who didn’t have to produce his illusions in stone. These are dream goddesses.

Violence is a favourite theme of ancient Greek artists. Reared on the myth of the Trojan war and experiencing the reality of wars with Persia and between Greek cities, classical artists found new ways to show conflict. This human fighting a centaur, carved for the Parthenon in Athens, is astonishingly real in its detail and dynamic energy.

This majestic bronze, found in the sea off Greece, conveys the magic of Greek mythology. The god – probably Zeus, lord of Olympus himself – is caught in the act of hurling a thunderbolt. His body is charged with divine power, and yet, it is a human body, neither colossal nor ethereal but the mirror of ourselves. The Greek gods are human, all too human, and their petty squabbles cause wars and sorrow in the world.

The Siren vase. Photograph: © Trustees of the British Museum.

In Homer’s Odyssey, one of the founding epics of Greek literature, Odysseus longs to hear the seductive yet dangerous song of the sirens that lure sailors to their deaths. So all his crew plug their ears, and Odysseus has himself lashed to the mast. This powerful painting captures the tension as Odysseus strains at his bonds, his whole body agonised, his head raised in rapt listening.

The Motya charioteer (c 350BC)

The Dionysus Cup by Exekias (c 540BC) 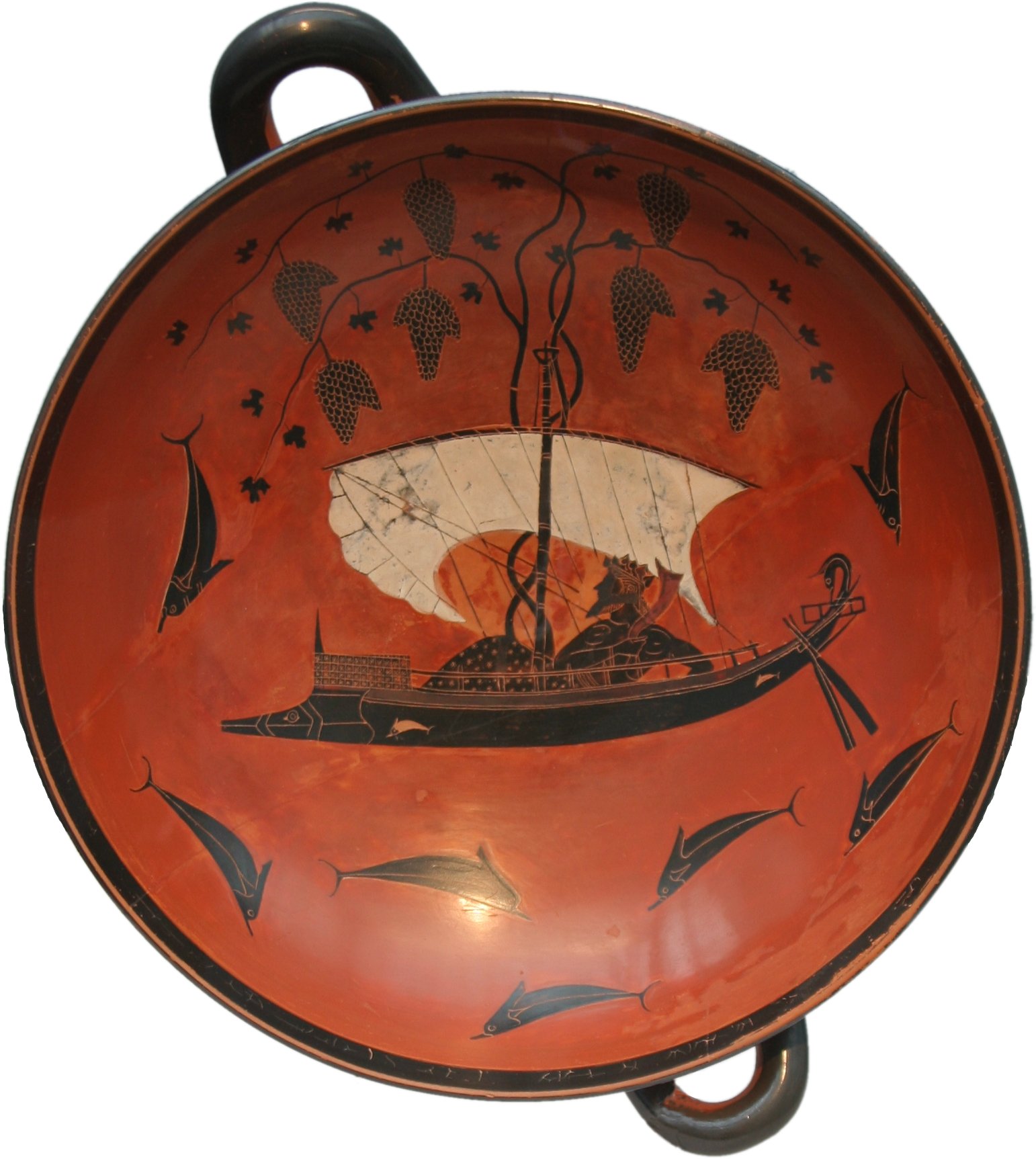 Dionysus, god of wine and madness, sails on his boat, surrounded by dolphins, in this delightful painting. Part of the fascination of Greek art is that its themes were taken up by artists down the centuries, as the myths of this culture were constantly being rediscovered. So this image of Dionysus can be compared with later portrayals of the wine god by Titian, Michelangelo, or Cy Twombly.

When the enthusiastic, romantically minded archaeologist Heinrich Schliemann discovered this golden mask at Mycenae in 1876, he had no doubt that it must be the death mask of Agamemnon himself, the king who led the Greeks in the Trojan war, only to be assassinated on his homecoming. Of course there’s no proof of that, but it is one of the most compelling faces in art.

One comment on “The Top Ten Ancient Greek Artwork”